The 1955 Pontiac benefited from more changes than any model since the Pontiac had first been introduced in 1926, as it had a reported 109 new features and three new bodies. The top-of-the-line Star Chief rode on a frame that was 11 inches longer than other models, and it was powered by one of the best engines ever used in a Pontiac, the 287-cubic inch "Strato Streak" V-8. This engine was smaller, more rigid, and better suited for the higher compression ratios that were coming into use after World War II. The Star Chief's "Strato Streak" could produce 180 horsepower and was capable of propelling the car upwards of 90 mph, which was ideal for the long, modern highways being constructed across this country.

Helping to make the Star Chief Convertible an American icon was its appearance in several episodes of the classic television series I Love Lucy, in which one of the cars was driven cross-country by the Ricardos and the Mertzes in their move from New York to Hollywood.

Between 1954 and 1957, the Star Chief was Pontiac's prestige model; the car was easily identified by its chrome star trim along its sides. When the storyline of I Love Lucy pointed towards a Hollywood setting in the 1954-1955 season, the characters "drove" (in episode 110, "California Here We Come") to the West Coast in a 1955 Star Chief convertible, that in the previous episode "Lucy Learns to Drive" was "bumped together" with a 1922 Cadillac Type V-63. In 1954, Pontiac also introduced air conditioning with all the components under the hood, a first for the price range. Seat belts were added as options in 1956.The Star Chief was available in Deluxe and pricier Custom trim, with the top trim level hardtop called the Catalina.

Prior to the introduction of the Star Chief, all Pontiacs had shared the modest wheelbase of the Chevrolet. The introduction of this new premier model in 1954 was the first application of the longer 123.5 inch (313.7 cm) wheelbase of the junior Oldsmobiles and Buicks to the Pontiac division. The car was still on the A platform, but with 11 in (28 cm) added towards the rear of the frame.

Along with an all-new body, the straight-eight was superseded by the new V-8 power in 1955.Typical for the 1955 Pontiacs is the design with two wide "Silver Streaks" running the length of the hood. 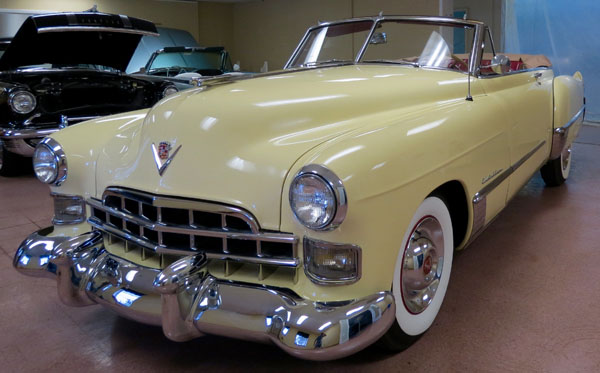